Sometimes, a pride-filled country quote is all you need to show the world that you keep your motherland close to your heart. Patriotism is not a frenzied outburst of emotion that you have for a brief moment. Instead, it is a steady dedication towards your land for a lifetime.

Every resident seeks peace, harmony, love, and a feeling of belonging with the people of their country. Those who get it, are surely lucky out of the lot.

Here we have compiled some of the best country quotes of all times. These can be put to good use for various moods and occasions here and there. Moreover, you can say a lot that goes on in your heart within a few words. Quite a win-win situation.

You can honor the people who gave their lives to earn you freedom. Furthermore, you can pay tribute to the glorious history of your land.

“My country is the world, and my religion is to do good.” – Thomas Paine

The best way to start your day is to ignite your enthusiasm with motivational quotes like this. It teaches you to give yourself out to your country. Your country is your small world in itself.

Moreover, you learn to value your country’s men. It becomes your religion to be good and do good for your fellow people. Undoubtedly, this message inspires you to propagate brotherhood and humanity in the world. You become the carrier of love and peace.

“People are the root of the country.” – Tamuna Tsertsvadze.

Love for your country is an exceptional thing. You just can’t do too much of it. Being able to call a land your own is a big privilege. Hence, you must feel lucky to be a resident of your country.

The inhabitants are the roots of a nation. They provide strength and wholesomeness to the land. One must value his land and his fellow mates. After all, they are the only thing that he can call his own. 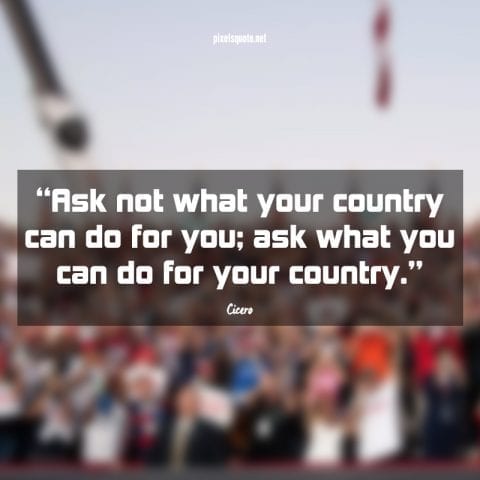 A country quote must aim to stir up your passion and patriotism. Without a doubt, this one successfully does that. You must consider actions that promote humanity and freedom.

“Even if my country does seem to have forgotten me, I have always thought about it.” – José Rizal.

The love for your country infuses a sense of pride and belongingness in your heart. The feelings of pride and patriotism are so strong that even if your country forgets about you, you can never let it slip out of your soul.

Indeed, what this country quote wants to say is clear. The best way to portray your love for your country is to become highly involved with everything that is beneficial for all the people of your community.

“Our obligations to our country never cease but with our lives.” – John Adams.

Undoubtedly, our land gives us plenty and in abundance. Right from giving us our identity to providing us with various rights, our country showers us with many gifts. In turn, there are certain duties that we must fulfill towards our motherland.

These responsibilities only come to an end when we breathe our last. We can never be good enough to repay all that our country does for us. What we give back is just a small percentage of what our soil renders.

“A patriot must always be ready to defend his country against his government.” – Edward Abbey.

Truly speaking, even if democracy was put into force, there’s no way to assure that the government would be fair and just. A person who is absolutely faithful towards his country should be brave enough to even face the government for what he thinks is right.

Real patriotism lies in working for the peace and goodwill of your land and its people. Regardless, who holds power and authority. You must be always ready to take up a stand for your nation.

“A country without vision runs into every direction.” – Toba Beta.

Surely, it is very important to have your thoughts and vision be clear as a crystal. This country quote emphasizes that without a vision, the country becomes disillusioned and forgets its aim or goals. Sight is what you see.

On the other hand, vision comes straight from the heart. A country led by strong-hearted leaders is sure to be on the rise. Nothing can stop such people. But without vision, success will surely be only a dream.

“A true patriot loves humanity, not just their country or community.” – Debasish Mridha.

Although patriotism is defined as a sense of belonging that a person has for his country, it swells up too much more than that. Being a devotee of your nation prompts you to take up love and humanity as your tools to success.

It does not limit your love to your country or your community. Instead, it inspires you to value humans irrespective of their backgrounds. Having pride in your identity makes you learn to respect every person’s identity too!

Country quotes about life and love

“There is no room in this country for hyphenated Americanism.” – Theodore Roosevelt.

Hyphenated identity refers to a person having mixed nationalities. Not belonging to America alone simply raises suspicions on a person’s loyalty and motives. Undoubtedly, it becomes a matter of concern to watch out for anyone who has two nations to prove their allegiance to.

Although it is right on the authority’s part to look out for such people, not everyone is bad enough to come under the radar. Some people truly, heartily prove their innocence and love for their country.

“In the face of impossible odds, people who love this country can change it.” – Barack Obama.

This country quote by none other than the US’ ex-President proves that hope and optimism are necessary companions when you are on your way to prosperity. One must know how to ignore all the difficulties and path-blockers that come your way.

This thought-provoking quote instills faith and courage in all residents of a country. Those who really love their country will surpass all odds to uplift their motherland. Whatever difficulties you encounter, your love for your soil will exceed all hindrances.

For every country, a specific day is devised to honor the country’s independence. These country quotes are surely going to help you mold whatever you’re feeling into words. That too, beautifully! For sure, the spirit of freedom and goodwill is bound to make you feel nostalgic and emotional.

But these awesome quotes about the country will definitely help you channelize your emotions into something worthy. You must also share these patriotic messages with your friends. Undoubtedly that would ignite similar emotions in their heart. After all, love for your country is above all other worldly pleasures.